Wren Academy have never got this far in this tournament before, so any result would have been a fantastic achievement.

Max P, 8 Piccadilly had a tough match but unfortunately lost 6-4, although he was still in high spirts for the doubles match.

Lucas F, 9 Walbrook had one of the closest matches we have ever seen and came out on top with a 6-5 victory which required blood, sweat and tears.

Both Max and Lucas dominated their doubles match with the end result of 4-1 victory.

And Otto H, 8 Holborn began his match by losing the first few games and he had to step it up, which is exactly what he did and fought back to gain a 6-4 victory.

Ben and Otto played excellently in their doubles which ended up with a comfortable victory of 4-0.

They were all ecstatic with the win and excited to go through to the regional final which took place on Friday 14 October at the Sutton Sports Village.

First ever time for Wren Academy making it to the Tennis Regional Finals.

Following on from our emphatic win in the county finals, the team was confident and enthusiastic for the regional finals.

This is the first time any of our students have ever gone this far in the competition, so just being there was an achievement on its own.

After some extremely difficult matches and some hard fought efforts we ended up coming in 4th place.  The students took this as an opportunity to reflect and learn about areas of strengths and improvements, so that we can attempt to do even better next year.

Well done to them all for their excellent effort and sportmanship throughout the whole tournament.

We are pleased to announce that we were one of the best represented schools in the borough and have great levels of success at this event.

These successes include a variety of Top 5 finishes:

All of their success was due to the resilience and determination shown on the day. Keep up the hard work.

An honourable mention to all the students who have participated in any of the fixtures with the calendar now in full swing and to the students for representing themselves with high standards. 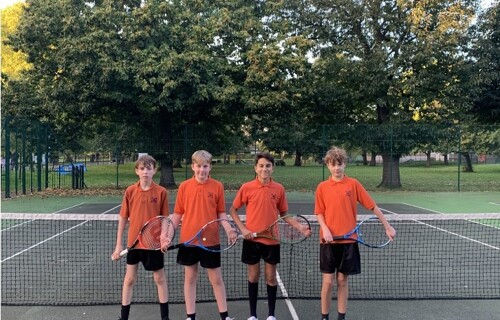