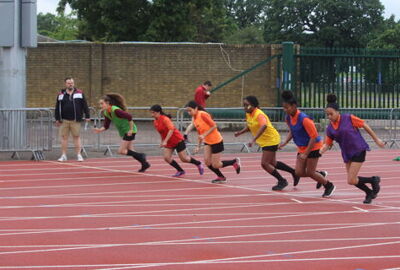 At Wren Academy we operate a House system.  This means that every student in Years 7-10 is allocated a House to which they belong for the duration of their time in the Academy.

We thought very carefully about what to name our Houses after, way back in 2008, and settled on some Christopher Wren designed churches from around the city of London.

The Houses are as follows:

Each of the six Houses is led by a Head of House and contains 120 students.  One of the main reasons behind choosing to operate a House system is the way it can help to create a sense of community, to build friendships and to reduce the incidence of bullying.  This is because in each tutor group, there are five or six students from each year group; it’s like a family.  Every new student has a ready made network of older brothers and sisters to help them settle in, get used to the Academy systems and help them, if they are ever struggling.

The identity of each House has developed through links with the associated Wren church and also the shared experiences of students working to win competitions.

One of the main benefits of the House system is the opportunity for all students to feel part of a smaller community within the school.  Throughout the year, Houses compete against each other in a series of challenges and competitions with the aim of involving all students in developing the confidence, courage and skill to represent their House in a friendly and sporting way.  The year’s competition schedule culminates in the Summer term with our Interhouse Athletics day (we are different from other schools in that we have two separate sports related days of competition in the Summer.  We also have Interhouse Sports Day which allows students to take part in a physical competition as part of a team as well as individually.  Both days are very popular!).

But it is not all about sport.  Five times a year we run House competitions in Poetry, Quizzing, Benchball, Singing (always popular!) and the Marble Run.  This last competition is a fun way to put lessons learned in our Design and Technology department to the test, in line with our Academy specialism, Design and the Built Environment.  Over the course of Wren Academy’s growth and evolution, a number of strong Inter-House rivalries have come and gone, with particular Heads of House being very partisan about how well their House is doing.

To view the Rolls of Honour list and the latest standings in the House competition please click here.

St. Paul’s Cathedral, in the City of London 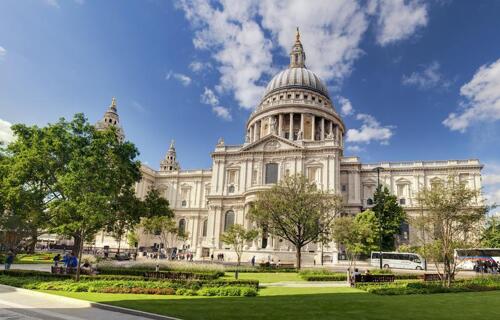 St Paul's Cathedral is an Angelican cathedral in London.  As the seat of the Bishop of London, the cathedral serves as the mother church of the Diocese of London.  It sits on Ludgate Hill at the highest point of the City of London and is a Grade 1 listed building.  Its dedication to Paul the Apostle dates back to the original church on this site, founded in AD 604.  The present structure, dating from the late 17th Century, was designed in the English Baroque style by Sir Christopher Wren.  Its construction, completed in Wren's lifetime, was part of a major rebuilding programme in the City after the Great Fire of London.  The earlier Gothic cathedral (Old St Paul's Cathedral), largely destroyed in the Great Fire, was a central focus for medieval and early modern London, including Paul's Walk and St Paul's Churchyard being the site of St Paul's Cross.

The cathedral is one of the most famous and most recognisable sights of London.  Its dome, framed by the spires of Wren's City churches, has dominated the skyline for over 300 years.  At 365 feet (111m) high, it was the tallest building in London from 1710 to 1963.  The dome remains among the highest in the world.  St Paul's is the second largest church building in area size in the United Kingdom, after Liverpool Cathedral.

Services held at St Paul's have included; the funerals of Admiral Nelson, the Duke of Wellington, Winston Churchill and Margaret Thatcher; jubilee celebrations for Queen Victoria, peace services marking the end of the First and Second World Wars, the wedding of Prince Charles and Lady Diana Spencer, the launch of the Festival of Britian, the thanksgiving services for the Silver, Golden and Diamond Jubilees and the 80th and 90th birthdays of Queen Elizabeth II.  St Paul's Cathedral is the central subject of much promotional material, as well as of images of the dome surrounded by the smoke and fire of the Blitz.  The cathedral is a working church with hourly prayer and daily services.

Wren’s masterpiece is a focal point of Wren Academy in terms of Design, Innovations, Planning and Excellence.  If you look closely, you can see that the Wren Academy logo is the architectural footprint of the cathedral. 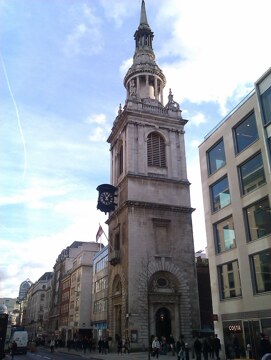 St Mary le Bow is steeped in history. In the nursery rhyme ‘Oranges and Lemons say the bells of…’ the bells of St Mary’s are referred to as ‘the great bell of Bow’.  The bell was so loud it was once used as the curfew bell for the whole city.

St Mary’s has had many brushes with war and danger.  In 1941 the church was badly damaged during a World War II bombing raid and was rebuilt to its current form in the 1950s.  A place of peace in the midst of the city.

Each year St Mary-le-Bow hosts the Boyle lecture which aims to promote the understanding of science and religion.  The church serves the surrounding community in many ways.  It has a food bank and runs a project to support young people who are homeless.  The church also offers a place of rest and contemplation for city workers. 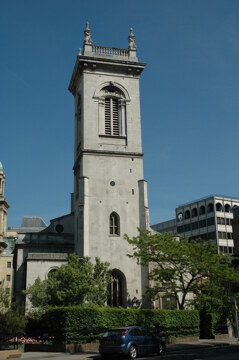 St Andrew has a proud and long 1000-year long history of Christian service and worship. It is a site of great archaeological interest and in 2001 a number of Roman remains and pottery were discovered. In keeping with its prominence and reputation, St Andrew’s has an association with many well-known figures in history. Henry Wriosthesley, Earl of Southampton and godson of Henry VIII worshipped here. Thomas Coram, who founded the well-known foundling hospital on Coram Fields is buried here. The British Prime Minister, Benjamin Disraeli was baptised here.

St Andrew also has a colourful history linked to the Civil War and religious tensions of the 17th. St Andrew’s also has a tradition of supporting those in need. Today it has runs a very active charity offering grants to families and individuals on low-incomes (and local charities that support them) who need financial support. It also provides a place for quiet reflection amid the noise and haste of the city. 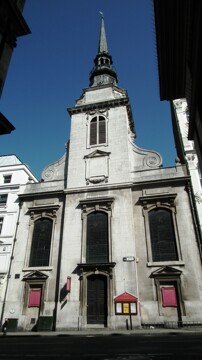 St Martin is another famous city church with a long history.  A church was this site dates back to the 7th Century and was said to be founded by a Welsh king, King Cadwallader, although how much of this is legend and how much is history is not completely clear.

There is a long history of charitable work in the parish. In fact, a brass plaque found in the church describes a 17th Century charity founded by an Elizabethan fish-monger called Thomas Beri, who gave bread to those in need.  In a side room of the church, there is a sculpture of a pelican feeding its young. The carving is said to be a very early Christian representation of Jesus and inspired by a pre-Christian legend that in times of famine, a mother pelican would pierce her breast, allowing her young to feed on her blood, avoiding starvation, a poignant reminder of the every day struggles that life in 17th Century London might have entailed. 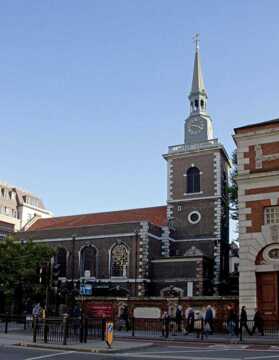 St James’ is in the heart of Piccadilly and dates back to the 1600s when Henry Jermyn, 1st Earl of St Albans, obtained the land and built St James’ Square, St James’ Church and the surrounding streets. His design went on to inspire the growth of the whole of the West End of London.  The church boasts a memorial to William Blake, the famous Romantic poet and artist, who was baptised at St. James.

St James’ Piccadilly hosts and welcomes a diverse and inclusive community, promoting wellbeing and dignity for all. They often speak out on issues of injustice, asylum, earth and racial justice and LGBTQ+. There is a strong tradition of offering hospitality to the homeless or those on a low income and the church seeks to be a welcoming space for everyone to reflect, create and debate.  St James’ regularly hosts art installations and music concerts. 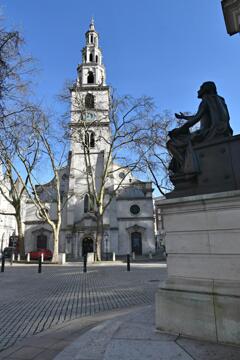 St Clement Danes also receives a mention in the famous nursery rhyme, as ‘the bells of St Clements’.   The church is the official church of the RAF and when you visit, you can see books of remembrance honouring the military service of those who have died while serving in the RAF; over 1000 unique slate squadron and unit badges embedded in the floor; colours and squadron standards from disbanded units and many items of unique historical RAF memorabilia. The church holds regular events celebrating its role as the RAF church, including hosting RAF bands and military funerals.

St Clement Danes also has a strong musical tradition and hosts regular lunchtime concerts which are open to the public. 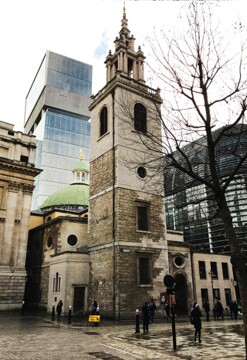 St Stephen’s has the honour of being Sir Christopher Wren’s own church, as he lived just around the corner at 15 Walbrook.  The church’s copper clad high dome was based on his designs for St Paul’s Cathedral.

St Stephen’s has a strong artistic and musical heritage which can still be seen and heard today.  The altar was created by artist Henry Moore. The kneelers placed around the altar were designed by abstract painter Patrick Heron.  The church also has a history of finding new ways to reach out to people suffering isolation and in need of community.  The national mental health and suicide prevention charity The Samaritans began life at St Stephen’s in 1953.  The church has strong links with The Samaritans, which was founded by a previous vicar Chad Varah in 1953 and initially worked out of the church. The London Internet Church was established in 2006 and is still based at St Stephen’s.