The History department took 50 Year 9 students to the First World War battlefields of Belgium and France.

On Monday 11 and Tuesday 12 July, the History department took 50 Year 9 students to the First World War battlefields of Belgium and France. This linked to students’ curricular studies and offered an important moment for students to reflect and remember what was meant to be the war to end all wars.

The trip started bright and early at 3.00am on Monday morning! We boarded the coach which made its way to our first visit to the so called Trench of Death in Belgium, where students had the ability to walk through a Belgian trench and consolidate their knowledge of trench warfare in advance of their GCSE study. We were accompanied by two expert guides, Andy and John, who amazed us with their fantastic in depth knowledge of the First World War. Next we visited two cemeteries, a German and a British cemetery, and considered the differences in the ways each nation commemorate the fallen.

The trip was rendered more poignant by the fact that we were able to pay respects to the relatives of several students. Pilgrimages to the graves of five different students and staff members relatives enabled us to really reflect on our personal connections to the war and remember those who lost their lives over a century ago. At the Last Post Ceremony at Menin Gate, students laid a poppy wreath on behalf of Wren Academy, which further helped us commemorate the lost.

After a busy and emotional day, students were able to play bowling where some of the students put the staff to shame with their exceptional scores!

On Tuesday, we visited the battlefields of the Somme, a key case study for students who are about to embark on GCSE History courses. We visited a huge crater at Hawthorn Ridge, saw the remains of the battlefield at the Newfoundland Memorial and paused to reflect at the Thiepval Memorial. After an action packed couple of days, it was time for our students to go home.

We were so very proud of the respectful attitude students displayed at all times. John, one of our tour guides, commented that the students were fantastic ambassadors of what is good about our education system.

Ultimately, this trip, though educationally enriching, predominantly served to help us as a Wren community to remember those who lost their lives in the Great War. Thus, it seems appropriate to end this article with the following plea for remembrance:

‘They shall not grow old, as we that are left grow old

Age shall not weary them, nor the years condemn

At the going down of the sun and in the morning

We will remember them’. 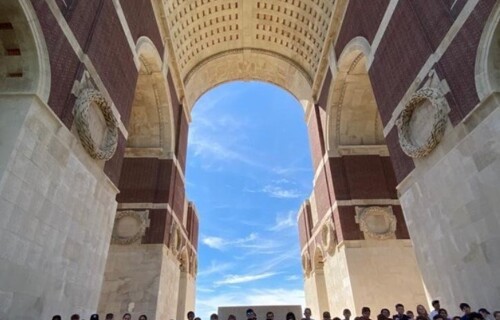