Students are awarded for the positive impact they have on others, leadership and personal achievement, which is not linked to attainment. Actions such as; compassion, volunteering and involvement in projects which can often go unrecognised.

This year we have the opportunity to award nine students with the Jack Petchey Achievement Award. Winning students get the opportunity to give £300.00 to the department of their choice to use for the benefit of the wider student body. Students are awarded for the positive impact they have on others, leadership and personal achievement, which is not linked to attainment. Actions such as; compassion, volunteering and involvement in projects which can often go unrecognised.

The final 6 students are listed below:

Georgette has shown remarkable resilience and continues to make good progress with her outlook having a good influence on others. Her Duke of Edinburgh research project was reflective and moving. She has been overcoming adversity as well as managing to maintain focus and a positive attitude when coping with a longer journey to school.

Georgette has decided to gift her grant money to the Drama department. The funds will be spent on an Apple iPad pro and a 53-inch tablet tripod. Both will be used to film A Level, BTEC and GCSE Drama performances.

Felix is well deserving of the Jack Petchey award due to his exemplary attitude to helping people, being a role model and contributing to his community. Felix has helped at the charity ASLAN who helps the homeless. Most Fridays, he makes sandwiches that are then distributed to the homeless on Saturday mornings. He has been a role model coaching the younger students at his tennis club on Saturdays, setting up drills and helping the students work on their techniques. In school Felix has worked on the lighting for the school production, sacrificing his evenings to help run the show. The skills and techniques he has learnt from this has led to him to working on the technical team for shows in the Royal Albert Hall.

Felix has decided to gift his grant money to the Religious Studies department. They will be using the funds to improve their A Level textbook resources.

Leo has an exceptional talent in drums and has stayed back for additional practice. He shows incredible resilience with his lessons and always has a positive attitude to learning. Leo is always willing to support his fellow students in class, as well as in the lower year groups. He takes time out and devotes his Saturdays to volunteer at his local charity shop to help his community.

Azeem is an active member of the Wren community. As a member of the student voice team, he advocates for change and speaks up for students. This year, he was responsible for suggesting the four-square activity on the playground. Azeem is also a Drama Curriculum Advisor and is applying for the Science Curriculum Advisor team this year. Azeem is keen to present new ideas such as Culture Day, which he has been discussing with leaders in the Academy.

Leo and Azeem have both decided to give their grant money to the Science department. They will be using the funds to purchase new scientific equipment to support and enhance the learning of students within practical lessons.

Stephanie is a genuinely kind and humble student who shows this through how much she helps students younger than her both in Tutor times and around the Academy in general. She is always willing to assist younger students in finding their way around the school, who are having trouble with their timetables and have conversations of comfort and encouragement. She carries this same attitude in the wider community outside of Wren, where she volunteers at rainbows (stage before Brownies) and also by being a ranger for the girl guides, assisting those around her in meeting their goals. In school, Stephanie has made a real effort to fully immerse herself into the Wren wider community through becoming a Library Ambassador and a Computer Science Curriculum Advisor. She also represents Wren in the Year 10 Girls Football Team.

Stephanie has decided to donate her grant money to the school Library. The funds will be used to purchase a wide range of new literature and resources to benefit the Academy as a whole. Stephanie will work with Miss Raddon to choose these.

Jaian is helping to teach young children that have an interest in Tabla how to play. He has only recently taken his grade 7 exam and has been volunteering his Saturday mornings since September to help teach. For the whole of March, he taught the entire class on his own because the teacher was taking a sabbatical. He is giving back to the community that taught him how to read, write and speak Gujarati, and in doing so managed to get a grade 8 in his Gujarati GCSE exam last year. He has a passion for playing and performing and is giving up his free time to teach others.

Jaian has decided to gift his money to the PE department. They will be using the funds to purchases nine pairs of running spikes to support the athletics team. 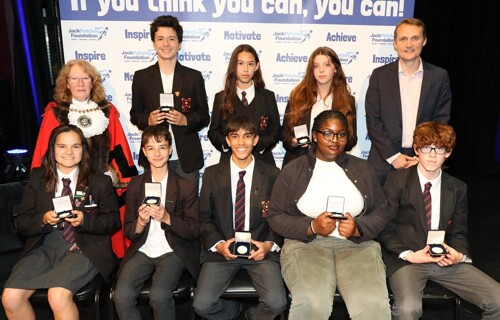