On Friday 25 October, Mr Barker and I took a group of Year 11 boys on a football tour to Manchester with the aim of enabling the students to have the opportunity to develop their knowledge and history of football, whilst playing against opposition from a different area of England.

On Friday 25 October, Mr Barker and I took a group of Year 11 boys on a football tour to Manchester with the aim of enabling the students to have the opportunity to develop their knowledge and history of football, whilst playing against opposition from a different area of England.

After a long journey, the students played a fixture against a local school.  They stepped up to the challenge and displayed a great team performance, winning 5-0 with five different goal scorers.  The students worked extremely hard in adverse weather conditions with some great team goals summarised with the last goal which started from a defensive thrown in. They then went onto enjoy a well-earned team meal where we analysed their performance and discussions outlining the rest of the tour.

The following day we visited the Manchester United Museum experiencing the history of United mangers, club honours and famous victories, followed by a tour of Old Trafford stadium with behind the scenes access to the home changing room, dug outs, players tunnel and media room, which the students really enjoyed. 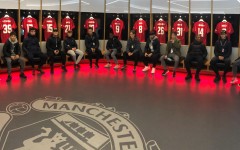 Later that day, the Year 11 football team visited Salford City Football Club which is owned by Manchester United’s ‘Class of 92’ where they were able to watch a very competitive League 2 match.  The students then demonstrated their competitive side during a game of bowling.  However, Mr Barker won on this occasion.  On Sunday the students visited The National Football museum where they got to see the Premier League and FA Cup trophies.  They were able to see how football developed over the world and got to see the first ever England kit, a pair of football boots and the hand written Laws of the game, before participating in some practical elements of football including technical passing, skill zone and quizzes on the location of the world cups.

I am extremely proud of how the students conducted themselves throughout the weekend consistently displaying a very mature attitude to all activities and people they met.  This led to staff members from the opposition school, restaurants and hotel all commenting on how polite and well-mannered our students were.  It was great to see students thriving in a different setting with their behaviour being exemplary and they truly represented Wren Academy excellently.

Below you can read how two of our students enjoyed the experience.

We started with a match against another school where we grew into the game and after Tanzid’s volley 15 minutes in we controlled the game well. After that goal we grew stronger as a team and played great football with four more goals from James, Alex L, Alex F and Jamal.  The evening meal and breakfast the next day helped bring everyone together as a team keeping the moral from the previous day.

The biggest part of the trip was the tour of Old Trafford and the match between Salford and Scunthorpe United.  The day was absolutely amazing and very exciting.  The stadium’s history is amazing and the match we saw was very intense with both teams wasting chances to win, it finished 1-1. The bowling was also intense with no one wanting to lose but myself and Mr Barker were victorious at the end of the day. Visiting the National Football Museum was very interesting and we were very happy to share our memories on the way back about one of the most enjoyable trips we have ever had. George Constanti,  Bow.

What a weekend the Year 11 football team had!  This action-packed trip (kindly organised by Mr Head alongside Mr Barker) was great.  We kicked off with a great 5-0 win despite one of our team mates being ill!  Followed by the longest and best day, Saturday.  The stadium tour was epic and we really enjoyed being able to access the changing room and the tunnel.  The weather improved slightly in time for use to watch an extremely entertaining match at Salford City.  We travelled back to enjoy a team meal before spending time on the amusements and finally taking each other on in bowling. Credit is due to Mr Barker who beat the highest score there!  The same cannot be said for Tom and Louis who might need some more coaching from the experts (Mr Head and Mr Barker).  Returning home on Sunday gave us a chance to reflect on what an epic trip we had.  Overall, I would like to say a massive thank you to Mr Head and Mr Barker for giving up their time and arranging such an amazing and memorable trip. Dillon Stolarski, Walbrook 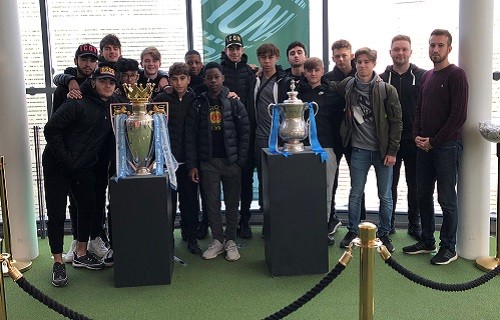