On Sunday 26 June, 30 students, myself, Ms Miveld and Ms Hannigan departed for the Year 8 and Year 9 Sports Tour to Spain. We arrived in Lloret De Mar late Sunday evening and the students had a restful night as they prepared themselves for the busy schedule which laid ahead.

On Sunday 26 June, 30 students, myself, Ms Miveld and Ms Hannigan departed for the Year 8 and Year 9 Sports Tour to Spain. We arrived in Lloret De Mar late Sunday evening and the students had a restful night as they prepared themselves for the busy schedule which laid ahead. On Monday and Tuesday, the football and netball teams receive professional coaching sessions from West Ham

FC and England Netball respectively before playing tournaments in the afternoons. Both of the Year 9 teams qualified for pool A on day one and played against very strong opposition with both finishing a very respectable 4th place out of 20 teams. The Year 8 netball team did very well over the two days and also finished 4th, narrowly missing out on the fin

al. All the teams represented the Academy extremely well with coaches commentating on the students high levels of sportsmanship.

On Wednesday we visited Water World Waterpark where students spent the day enjoying the rides and relaxing after their very exhausting training sessions and tournaments. Before travelling home on Thursday afternoon, students had the opportunity to experience the local culture in Barcelona as well as taking a tour around the Nou Camp, home of Barcelona Football Club.

It was great to see the students taking on the challenge of playing sport abroad, often against older opposition, where they demonstrated a great team ethos throughout the trip which was made possible due to their hard work, determination and resilience. Whilst I am extremely proud of the students’ performances, it was also very rewarding to observe them enjoying their sports and continuously developing their skill set.  I hope the success of this year’s Sports Tour encourages other students to make the most future opportunities offered.

The Spain Sports tour was amazing!  I enjoyed every minute. We started our trip by having two consecutive days of sport which was very tiring however, the teachers were very supportive and cheered us on until the very last game. The trip to Water Wold was very enjoyable and to top it off, on the final day we got to visit Barcelona and the stadium. Even though my legs hurt after the trip, I couldn’t have wished for a better time. Thank you to Mr Head, Ms Miveld and Ms Hannigan who made the trip very enjoyable.
Sesmi, 9 Bow

Well what can I say about the Year 9 Sports Tour to Spain?  Four days away with your friends, your football team in the sun in Barcelona. Perfect. We trained each day with excellent coaches playing matches and doing drills. We then started the tournament games against other schools, playing 5 games each day, winning 2 and drawing 1 on the first day (a hat-trick thrown in by me!) which meant we got through to the finals. The evenings were great fun too, bowling, mini golf and watching the football. The last day was spent at the waterpark which was great fun and what could finish a brilliant few days, visiting the Nou Camp and seeing where Barcelona FC play. An excellent trip away with great memories made from a great week.
Dylan, 9 Strand.

Ryan Head
Head of Ludgate and Teacher of PE 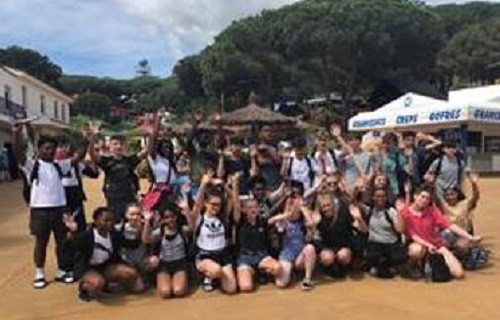